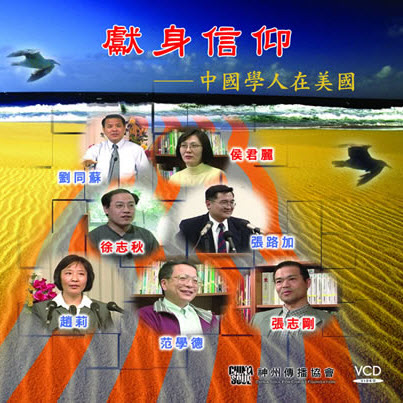 During the past ten years, numerous Chinese scholars and students have accepted the Christian faith while in the United States.  Among them are many who have since devoted their life to preaching the Gospel, planting churches, and serving as pastors.

Below are the stories of seven people:

Zhang Lujia, was an overseas student in Germany, and then later came to America to study theology.  He became a preacher after graduation.

Zhao Li, a member and Deputy to the People's Congress in Liaoning Province China, came to America, and converted while studying there.  She has joined her husband in preaching and pastoring in the church.

Liu Tongsu and Hou Junli, students of Beijing University and Yale University, both became pastors after their conversion.

Fan Xuede, a student of the Party School of CPC Central Committee, became a Christian and full-time servant of God.

Xu Zhiqiu, a student of People's University in China, now pastors in a Chinese Church in Boston.

Zhang Zhigang, a  student of People's University of China, preaches with his wife.